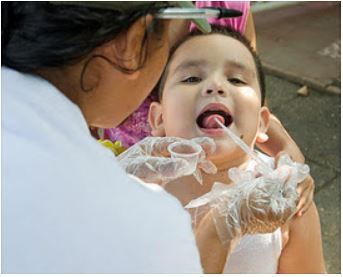 A CIET interviewer takes saliva samples from a child during the Camino Verde trial baseline survey.

The baseline measurement was carried out in two stages, between August 2010 and January 2011. The survey covered the 60 neighbourhoods that make up the Camino Verde trial’s sample.

In August 2010 we surveyed 8,402 households with a total population of 41,738 people. Three out of every four household informants were women. We measured indicators that included: demographics (population base, head of household); household economic base; women’s rights; perception of changes and problems in the community; and relationships within the community (identification and links with leaders, organisation, assessment of municipal administration). We also took the first saliva sample from 4,869 children aged between 3 to 9 years to find out if they had been bitten by dengue-infected mosquitoes.

In January 2011 we surveyed 8,056 households (4% fewer than in the first stage). We asked about perceived dengue risk; preventive actions undertaken in households “to avoid mosquitoes;” time spent at home looking for larvas or pupas; and household expenditures on products to fight mosquitoes and caring for sick family members. We also measured self-efficacy indicators (perceived personal and collective capacity) for dengue prevention; level of dependency on chemicals; and discussions with neighbours about “how to avoid the mosquitoes.”

As part of the January 2011 measurement, we conducted an entomological inspection to find larvas and pupas in 16,540 water containers in 7,150 households. We also took the second set of saliva samples.

The results from this survey served as a point of reference for the intervention impact evaluation when the final measurement was carried out in January 2013; they also constituted the evidence that was the basis for household and community group reflection and dialogues to support different options for action in the SEPA process.

Some results of the baseline survey

In January 2011, 80% of household informants considered that there were “quite a lot” of mosquitoes in their neighbourhood and 36% saw a “high risk” for dengue-related illness in the neighbourhood; but only 29% perceived dengue as the main health problem in the neighbourhood, in spite of it being the problem that was mentioned most often.

Mosquito control and reliance on chemicals:

Interviewed households employed different strategies to fight the mosquitoes: 23% used insecticides, 28% used repellents and 23% used fans and mosquito nets; 32% undertook actions to control breeding sites, including looking for larvas and pupas. Sixty-three percent of households had purchased products to avoid mosquitoes in the month before the survey, with an average cost of 120 córdobas (about US$5.50).

Reliance on chemical products was widespread: only 19% of informants said they disagreed with the idea that using temephos and fumigating is the best way to avoid mosquitoes. It is worth nothing that temephos use and fumigation were the Ministry of Health’s main intervention actions. (Temephos is completely controlled by the ministry and is not sold to the public.)

Perceptions and actions that involve the neighbourhood:

Half of those surveyed thought that their neighbourhood could solve the dengue problem on its own. Meanwhile, only 20% of households had had conversations with their neighbours about how to avoid the mosquitoes. On average, 18% of households had a member who participated in community organisations. Only in seven neighbourhoods, out of a total of 60, was the level of participation higher than 25% . Half of those surveyed, evenly distributed among all the survey districts, considered that the neighbours on their block helped each other.

In January 2011, we found, averaged among all districts, pupas in 8% and larvas in 18% of surveyed households. Forty-four percent of visited households had five or more containers that were potential Aedes breeding sites, with important variations by district.

Between August 2010 and February 2011, we took paired (repeat) saliva samples from 4,869 children aged between 3 to 9 years in the 60 Camino Verde neighbourhoods. The sample analysis showed that 6% of them had been bitten by a dengue-carrying mosquito during the intervening months.

Of the surveyed households, 8% said someone in the house had been sick from dengue in the last year. The average cost per household due to the disease was US$22, which is the equivalent of 9% of the country’s basic basket of consumer goods for the year 2010. An average of eight work days were lost by family members who suffered from the illness, and another four lost by those who had to care for them. Sick schoolchildren, aged between 6 to 18 years, missed an average of 11 school days. In 39% of these cases, the sick individual was hospitalised.